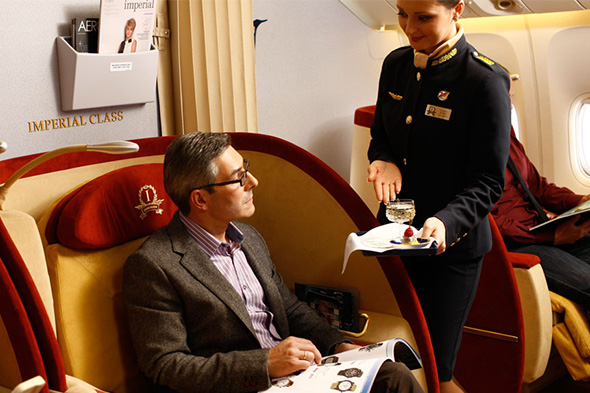 My next holiday was approaching and I was still questioning myself where I would love to go this year. I had always dreamed of visiting Varadero, Cuba and finally a good idea came to my mind not to put off this visit anymore. After booking a luxurious hotel which rendered truly 5-star services, time came to choose a carrier that would deliver me to that paradise.

Having heard many negative reviews from my friends of how a bad carrier can totally and hopelessly spoil the overall holiday impressions, I got down to choosing a reputable airline that could provide me with premium-class services.

The choice was not easy, but having spent hours examining reviews and brochures of different airlines I found out that the only national company to render posh in-flight services was Transaero with their unparalleled Imperial Class. I bought a round-trip ticket and started to wait for my holiday with impatience and anticipation.

At last the Day X came. At the arranged time a luxurious Mercedes E–class was near my place with a highly-professional and enchanting driver who drove me to the airport in practically no time. At the airport I was accompanied by Transaero Representative to a separate check-in and then within the following 15 minutes I was already in the waiting lounge where I savored delicious snacks and drinks that were offered for free.

The time flew by and my haul was announced. The Boeing – 777 I was going to fly on was a pure embodiment of safety and luxury so brilliantly combined in one aircraft. But what made me feel even more fascinated was its posh cabin interior where best traditions of hospitality of Russian Imperial Dynasties were closely intertwined with the latest on-board technologies.

At first sight I loved the spacious cabin with unique chairs embroidered with gold. My chair was located at the window as practically all chairs were, but for the two in the middle of the cabin. My personal flight attendant was highly professional in her approach and care when she addressed me by name. She explained that my chair can be transformed into a bed and that it also had massage controls. The in-flight entertainment solutions were outstanding and I ended up watching 3 interesting movies throughout the flight and listening to my favorite Jazz melodies.

Later on I savored the delicious caviar and smoked salmon. The menu was outstanding – it offered dishes from European, Russian and Japanese cuisines and the things I tasted was mmm… – absolutely heavenly. The meal was served on custom-made porcelain tableware which gave the meal a special imperial delicacy. There was also offered an extensive list of drinks served to you at any moment upon your wish.

Later on when the night fell, I had my bed made with an individual set of cotton bed linen; and the travel imperial kit that contained the pillow and blanket together with pajamas and slippers created an inexpressible feeling of home comfort.

When I woke up in the morning and finished my usual morning procedures, I was served with the most exquisite delicacies on board- French rolls with sweet fillings and homemade jam, pancakes with caviar of king salmon, assorted fruits and berries in a cup made of orange. The feeling was such as if I was a member of the imperial dynasty. After that I had time to check my email and read some news as Wi-Fi was on board.

But the dream flight came to its end as the plane began to land.  By the way, I did not feel the plane rattle during its take-off and landing. What is more surprising, I was full of energy and did not experience the usual after flight exhaustion.

I was as if under a spell from this luxurious flight. Besides that, my holiday was awesome; I enjoyed my time in Varadero and will definitely visit it again.

One more thing that I will definitely do again – I will fly with Transaero Imperial Class as their highly – professional services left an indelible impression on me.

P.S. Some people claim that Imperial Class tickets are too expensive, but, in my opinion, it was worth the money I paid.  Moreover, the company has a privilege program for those who frequently travel with Transaero Imperial Class – you can receive points for every flight and then get a reward free ticket. Moreover using PoshBerry portal I managed to save 20% of the ticket cost.