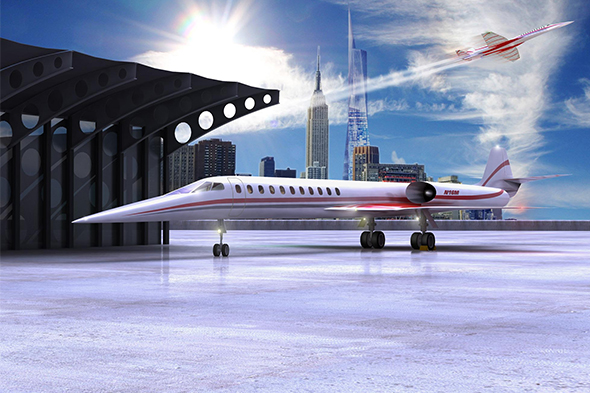 But how the story of supersonic aircrafts for civil aviation began?

The history of supersonic airliners for civil aviation is inextricably linked with the work-outs of the military aviation industry which developed at full pelt after World War II. In the 20th century one war followed the other and no surprise that the world and two opposing forces (The Soviet Union and the countries of the West) were totally obsessed not only with the arms race but also with the struggle for leadership in all spheres.

The first civil aircraft to exceed the speed of sound was Douglas DC-8. However, the amount of passengers it transported was equal to zero, it contained only full loadballast, and the whole flight can be named experimental as its main goal was to collect the necessary data about the compliance of the edge of the wings.

There were only two genuine supersonic airliners in the history of global civil aviation which are definitely worth to be spoken about – the Anglo-French Concorde and the Soviet TU-144.

While the Concorde was the result of the combined efforts of England and France, TU-144 was the result of work of Soviet scientists. While the Concord conceded a point to TU-144 in the question of speed characteristics, such as maximum speed, landing speed, maximum flight altitude and the amount of airports equipped for supersonic airliners` flights, the Concord superseded TU-144 in the practical range of 6400 versus 3080 because of high inefficiency of engines of soviet supersonic aircrafts.

The first flight of the great Concord took place in March of 1969 and there were 30 orders placed for this aircraft by different air carriers. Nevertheless, commercial flights started only in 1976.

Its each takeoff was accompanied by crowds of onlookers and broad press coverage. Parties, promotional tours, luxurious cabin design, champagne, black caviar and quail for lunch, and, no wonder, a very high ticket price turned the Concorde into a status plane available only for wealthy businessmen, actors, musicians and other celebrities. It was also chosen by members of royal families and once even by the Pope John Paul II. The most popular routes were Paris-New York, London-New York and London-Barbados and the highest ticket price reached $5000.

Even though everything could seem to be perfect, the Concord project turned out to be unprofitable. There were 15 serial supersonic aircrafts produced for British and French air carriers, 5 of which were sold at the symbolic price of 1 pound. The very high cost of the aircraft together with the high operating costs and high fuel expenditure did not let the Concorde reach self-sufficiency. Furthermore, the Concorde plane crash in 2000 where all passengers were killed and the terrorist attack of 2001 put an end to people`s faith in supersonic flights. The demand for supersonic flights considerably decreased and in 2003 the Concord made its last flight having transported about 3 million people since 1976.